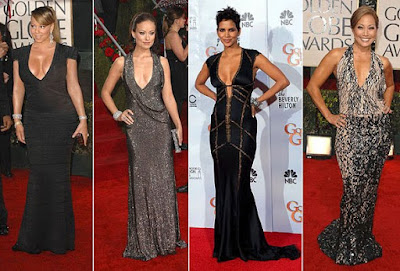 Anyone watching the 67th Golden Globe Awards couldn't help but notice all of the fabulous frocks making their way down a very wet red carpet. What were the trends that we'll all be following in the next few months, and especially this summer in the Hamptons?

Plunging necklines are nothing new in Hollywood. Of recent note, Jennifer Lopez's infamous green chiffon Versace gown proved there are always one or two leading ladies that show just how low they can go. But, with few exceptions, the ladies may have gone a bit too far this year. Fashion expert Leon Hall once told me that when daring to bare it is wise to use the 'pencil test' before you go in front of a camera. Simply put, if you're well blessed with a heaving bosom make sure the girls aren't sagging, it just ends up looking cheap and tacky.

Mariah Carey all but started a stampede when she walked the paparazzi pit with hubby Nick Cannon in tow toting an umbrella and keeping an eye on the Chopard jewels. During her interview with Ryan Seacrest it was all he could do to keep eye contact with the statuesque songstress. Her cups, they well, almost ran over more than once in her skintight Herve Leger bandage dress and she ended up looking a little desperate.

On the flip side, Presenter Halle Berry dazzled the audience when she stepped on stage in a Kaufman Franco silk bias cut gown with lace inserts. The result simply put, very sexy. Also on the mark, Olivia Wilde in liquid metallic Calvin Klein and Carrie Ann Inaba of "Dancing With The Stars" in glittering black and nude. 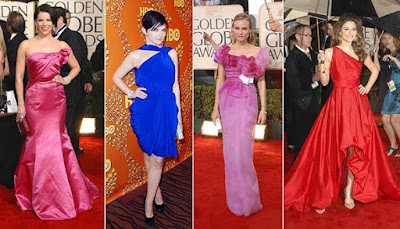 I love color, especially when it really pops on the red carpet and the stars that gave bold looks a chance were right on target with red, violet, fuchsia, and electric blue. The key to bright colors is to remember a little color on the face or stars, no matter how bright, end up looking tired and washed out. Best bet is a great red lip but beware of being to matchy, matchy - not cute.

From her starring role in "Gilmore Girls" to Steve Carell's wife in "Evan Almighty," and even a stint on Broadway, Lauren Graham of the upcoming "Parenthood" was simply stunning in a hot pink satin ball gown with a mermaid bottom and interesting top. With her dark hair piled high and her blue eyes glittering, she pulled it off. Also in pink and not to be outdone, "Inglourious Basterds" star Diane Kruger wowed the masses with her Christian Lacroix gown. True, many were left wondering about the intricate bodice with all the overdone ruffles but the tight waist and straight skirt saved the day.

Red, always popular at these red carpet fetes, made the rounds on the likes of Amy Pohler of "Parks and Recreation" who played it sleek and straight and TV talking head Maria Menounos who went a little cha cha with a wide skirt.

Electric slide, no, electric blue looked fab on Ginnifer Goodwin of "Big Love" who showed off her gams and pixie-ish hair. Rose McGowan, who usually makes an entrance looked a little prim in blue as she made her way to the Warner Brothers and InStyle after party. 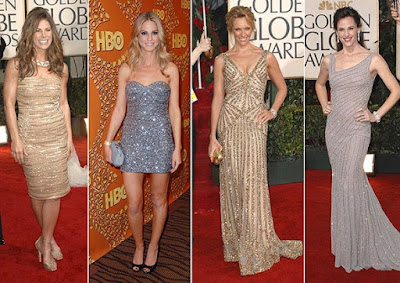 Water cooler talk at Hamptons.com this morning was all about the Golden Globes and topic number one was an actress who is fab on screen but usually not on the Best Dressed lists, Aussie actress Toni Collette, who should be renamed Miss Golden Globe after she strutted her very tan stuff down the carpet. Toni won for Best Actress Comedy for her role in "United States of Tara" but she stole the show, at least part of it, in her golden bejeweled gown.

Jennifer Garner was solo in silver while "The Biggest Loser" head trainer Jillian Michaels left her dumbbells at home and donned a golden champagne strapless mini. Kelly Kruger of "Entourage" hit the HBO after party scene in a silver disco dress. Anna Paquin of "True Blood" in gold with cap sleeves was all about the glam but may have gone too far with the front slit on her gown, and the black heels, well, let's just not go there. Wrapping up the glitter was Lake Bell of "It's Complicated," also at the HBO after party, who proved that horizontal stripes can be figure friendly. 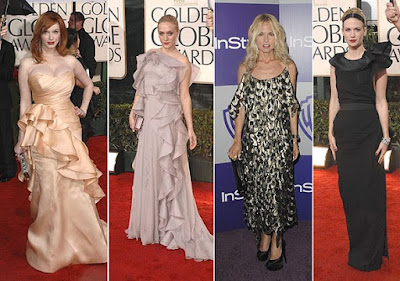 They can't all be images of perfection, though it was tough to find mistakes on the red carpet with so many stars listening to their stylists. The first mistake of the night was Christina Hendricks of "Mad Men" in an over-ruffled creation by "Project Runway" breakout couturier Christian Siriano. The always fierce Cristian missed his mark this time as Christina was simply too much for this pale peach satin confection. While the waist is beyond fabulous the top is too skimpy for her figure and the ruffles on the front were just too much for the sake of being too much.

Golden Globe winner for Best Actress in a Miniseries, Chloe Sevigny of HBO's "Big Love," was washed out in pale lilac Valentino and overwhelmed by ruffles, and more ruffles. Perhaps the usher who helped her to the stage to accept her award was trying to do her a favor when he stepped on her gown. We'll never know but she did change into a short black party dress before hitting the big HBO after party.

"90210" actress Anna Lynne McCord showed up to the Warner Brothers and InStyle after party in a white Grecian-inspired gown with a very odd bodice detail. Not sure if it was meant to evoke doves, a heart, or grasping hands but no matter how you slice it, it was just plain wrong.

Other notable fashion victims included Ashley Tisdale in a black and white flapper flop, Lindsay Lohan in a hooded silver mini, everybody's favorite Greek actress Nia Vardalos, January Jones of "Mad Men" who was attacked by another stray ruffle on the way to the show, and celebrity stylist Rachel Zoe who looked like she was stuck in the 1920s in a dress 10 times too big for her petite frame. 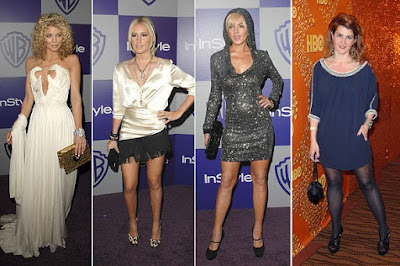 So many good ideas here but it all went so wrong for Anna Lynne McCord, Ashley Tisdale, Lindsay Lohan, and Nia Vardalos. Sorry ladies, better luck next year!

Cheers to the evening's winner and even bigger cheers to the ladies who stole the show and brought on the fashion! Can't wait to see what to wear at the Oscars!