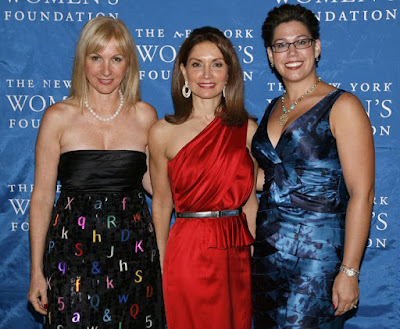 On a brisk autumn night in the Big Apple, Gotham Hall, a converted bank, opened its massive brass and glass doors to welcome the members of the New York Women's Foundation for their annual "Stepping Out and Stepping Up" awards dinner to celebrate the lives of hard working women across New York City who serve as "role models of courageous leadership, vision and commitment to women and families as individuals and as partners." The evening was a celebration of the investment this group has made in the community for the past 22 years through over $20 million in grants and educational programs to bolster the dreams of over five million women. The simple idea that if you invest in a woman you invest in the community resonated throughout these marble lined halls.

ABC News Correspondent Deborah Roberts hosted the evening and began by introducing Diana L. Taylor, Vice Chair of the organization. Taylor greeted the guests and extolled the virtues of the group, and how together they had made strides in the development of women and communities across NYC. Ana Oliveria, President and CEO, introduced notable guests in the room, including Mayor Mike Bloomberg and Mary J. Blige, then spoke passionately about the future of the organization and the new program for the New York Women's Foundation where it will work in conjunction with the Mexican Embassy, represented by a beaming Ruben Beltran, Counsel General of Mexico. 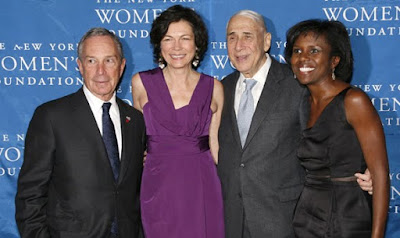 Amid bites of delicious beet salad and sliced fillet of beef, the honorees sat humbly as the introduction began, starting with Samuel Peabody who brought the lifelong work of honoree Elizabeth Sturz and her Argus Community in the South Bronx to life. Taylor introduced the inspiring Herbert Sturz to the stage where he explained that a life lived searching for justice for all was more than worth the adventure. He is the founding chairman of The After-School Corporation which works to see that all children have access to quality, free after school programs.

Abigail Disney reflected on the work of Pulitizer Prize winning married couple Sheryl WuDunn and Nicholas D. Kristof and their book, "Half The Sky" that opened the worlds' eyes to the terror of human trafficking. In her written notes she remarked, "Thank you for all that you've both done to take us to a whole new level and into another dimension of possibility." While Nicholas delivered his appreciation via pre-recorded video, Sheryl took the stage and challenged the assemblage to look to the heart and act against mistreatment of women across the globe.

Standing ovations followed each of the honorees and the room hushed for Roberts introduction of the evening's performer, none other than the Queen of Hip Hop, Mary J. Blige. A passionate Blige, a victim of abuse herself, performed her chart-topping "No More Drama" from her soul. It was raw and powerful and rocked the room to the core. 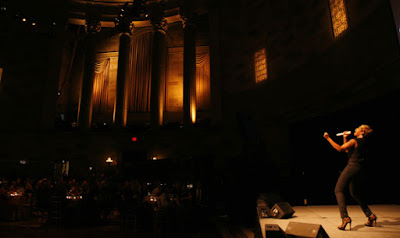 What? Is that a movie star or my former editor just looking like one? Great photo and nice write-up, Nicole.