What’s there to do on a Sunday night in the Hamptons, well plenty actually, but seriously when it comes to big benefits they’re usually reserved for a jam-packed Saturday night. The clever organizers behind the annual Great Chefs Dinner, namely event founder Lizz Salaway, think outside of the box and know that Saturdays are packed and plan their annual event to benefit Jeff’s Kitchen at the Hayground School for Sunday when social calendars are a bit lighter. Not only is the crowd fabulous but the guest chefs come from both the North Fork and the Hamptons bringing their scrumptious talents with them to share with the guests.

This year Chef Eric Ripert, famous chef/owner of Le Bernardin and guest judge on “Top Chef,” headed the team of chefs creating the special seated dinner with Joseph Realmuto (Nick & Toni’s), Christian Mir (Stone Creek Inn), and Miche Bacher (Sacred Sweets). Together these chefs put together a family style dinner of ceviche, striped bass, Hayground Salad, and tantalizing sweet endings each course paired with wines from Bedell Cellars. Eric explained that his ties to the Hayground School are pretty clear – his children “attend the summer camp and love to spend time in the kitchen and garden.” For the charming Eric, who does not make the social rounds and prefers to spend low-key time with family, being part of this event is “giving back.” 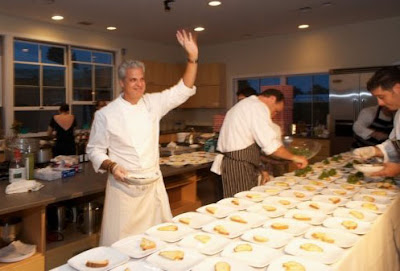 Another famously handsome “Top Chef” was on hand with a delicious bite during the cocktail party, Sam Talbot, as in the Season 2 winner and chef at Surf Lodge in Montauk. Sam brought a crab creation with blueberries, ginger, and crumpled popcorn – different and very tasty – and his sense of humor. He said that this was his “go-to” dish for big parties and that it’s “something that no one else ever does” so it’s become his “signature” cocktail party nosh. With his car, surfboards strapped to the roof of course, waiting and ready for the next destination, Sam told me that married life (to Columbian model wife Paolo Guerrero) was “wonderful” as he flashed his wedding ring. He also beamed when he talked about his restaurant, the Mondrian in SoHo, slated to open in 2010. Can’t wait to set that reservation. 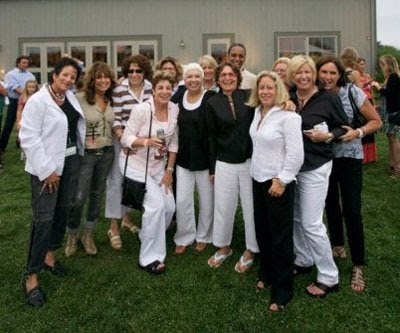