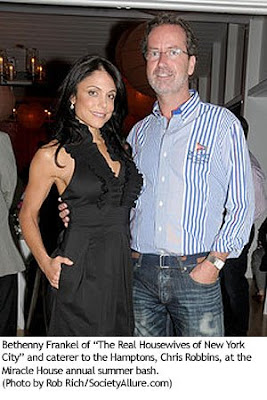 Each year the wonderful folks from Miracle House, a group that provides housing, meals, and advocacy to caregivers and patients receiving medical treatment in New York City, hosts a summer kick-off party in the Hamptons. This year the spacious Bridgehampton Tennis and Surf Club, that just so happens to overlook the Atlantic Ocean, held the festivities that started with a lavish cocktail party attended to by none other than famous Hamptons and New York City caterer Chris Robbins and his team from Robbins Wolfe Eventuers.
By all appearances everything was going along just perfectly - cocktails were chilled and delicious and every canape was scrumptious. As the sun began to set the live auctions and dinner started and that's when the party took a turn when hostess Bethenny Frankel of "The Real Housewives of New York City" took the mic during the live auction and proceeded to show just how 'real' she was talking like a drunken sailor. Using every profanity and homosexual innuendo in the book she took a lovely evening and made it rather uncomfortable as she insulted nearly everyone in the room. Uncomfortable laughter after her first 'joke' set the tone that went from bad to worse. Topping that, she posed in front of her books that she hawked all night and flashed her bum for the cameras. Real classy, Bethenny.
Miracle House representatives reached for comments after the weekend would only respond that the event had been successful, and we do wish that great organization well.
The party got back on track as Miracle House founder Nan Sweetser was honored for her tireless work. Taking the stage to perform, the original "Dreamgirl" Jennifer Holliday's soulful voice enraptured the room of nearly 300 including Amy Chanos, Gary Horowitz, Cory Shields, Sean Cassidy, Mario D'Andrea, Howard Kurz, Gerry Logue, Tony Moran, Craig Reynolds, Sam Rosenblatt, Mary Sculley, Michael Selleck, Joe Blount, Craig Reynolds, Rob Coburn, Monica Graham, Shirin Kerman, Sam Rosenblatt, Mario D’Andrea, and Cory Shields to name a few.